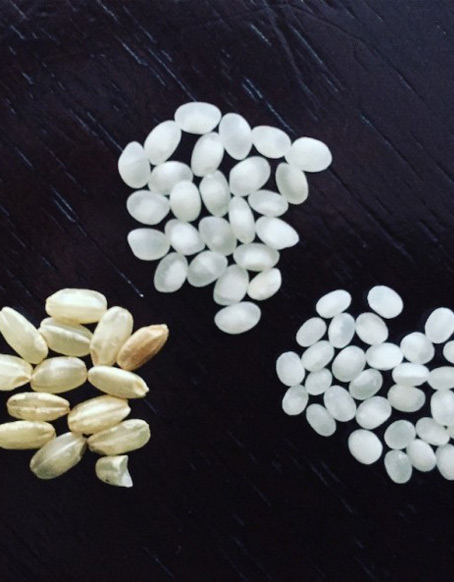 The rice that is used to brew sake is normally polished in order to get rid of some unnecessary components in the outer and middle layers. It is the pure starch in the middle that is most wanted for sake brewing.  Rice polishing is done with special machine about 30m tall.  It is polished by the grinder inside and it takes about 50 hours to polish 50% of rice.

Under the sake brewing law in Japan, the rice has a minimum polishing ratio, according to its grade. In general, the bigger the proportion of its original size being polished away, the better the grade/quality of sake. This leads to a finer and purer taste in the resulting sake. Polishing ratios can range from no minimum to 50% of its original size being polished away.

Brewer’s Alcohol can be made either from starch-based agricultural products or sugar cane. The amount of Brewer’s Alcohol that can be added is restricted to less than 10% of the total weight of the rice being used to brew the sake.

Premium sake can either be brewer’s alcohol added or non-added. Addition of alcohol is done not to increase its volume or level of alcohol, but to achieve a certain style of sake; in particular, to make a more fragrant style on the nose and lighter on the palate.

Requirements for Junmai – sake without addition of brewer’s alcohol

Requirements for Non Junmai – sake with addition of brewer’s alcohol 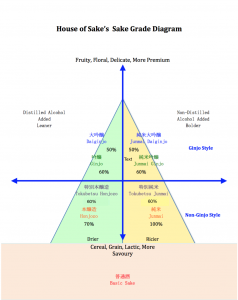 Higher the rice being polished, more elegant, delicate, fragrant and pure the sake gets.

It is not on the diagram, but there are “Tokubetsu” categories, where the sake is called “Tokubetsu Honjozo” or “Tokubetsu Junmai” when rice have been polished to Ginjo or Junmai Ginjo standards of minimum 60%.  In order for any sake to be labelled with the term “Tokubetsu”, it has to be made with a special method, for example, Kimoto or Yamahai, or has to be made with special strain of yeasts.

As the most basic sake, there is Futsu-shu.  Futsu-shu is not included in the premium category.  Futsu-shu means “ordinary alcohol” in English and it accounts for about 70% of total sake production in the entire world.  There is no minimum polishing ratio for Futsu-shu making.

House Of Sake
All rights reserved Copyright © 2022
Connect with us :